Based on the ICAP Credit Rating Score, MEGA DISPOSABLES S.A. continues to be a member of the “STRONGEST COMPANIES IN GREECE” community for 2 consecutive years: 2010 and 2011. 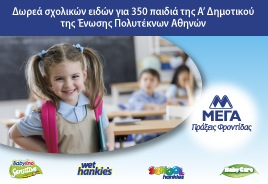 Donation of school supplies to 350 children of first grade, in cooperation with Athens Association of Large Families

On the occasion of the start of the new school year, MEGA Disposables , with the signature of Babylino Sensitive brand, supported for the 6th…

MEGA: Donation of 690,000 personal hygiene products, for the strengthening of the new program of the Municipality of Athens “Help at home Plus”