In 2019, the Greek baby diapers Babylino Sensitive  received the Product Safety Award from the European Commission.This top distinction reflects the top and non-negotiable priority of MEGA to produce an absolutely safe baby product: Babylino Sensitive. A product that has been recognized for its extremely high level of safety for infant skin, after a strict evaluation by EU’s special selection jury. 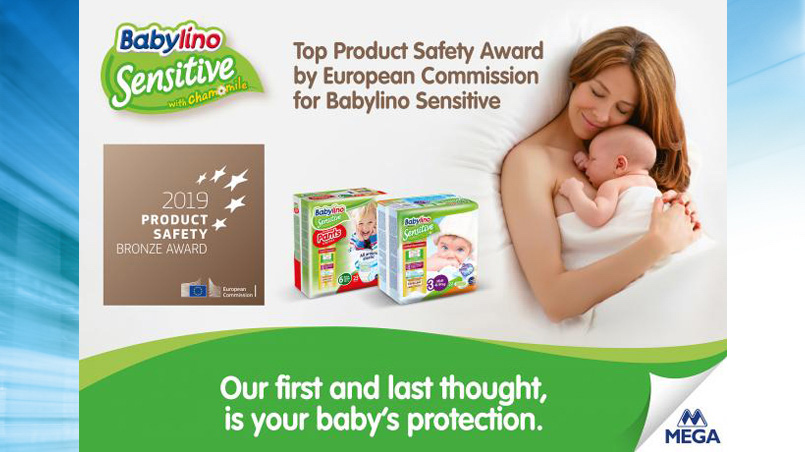 True Leaders destiction rewards and promotes businesses that face economic growth. Out of a total of 15,000 thousand companies surveyed, MEGA is among the 70 companies that have been distinguished on the basis of published results, while meeting objectively the following measurable criteria: 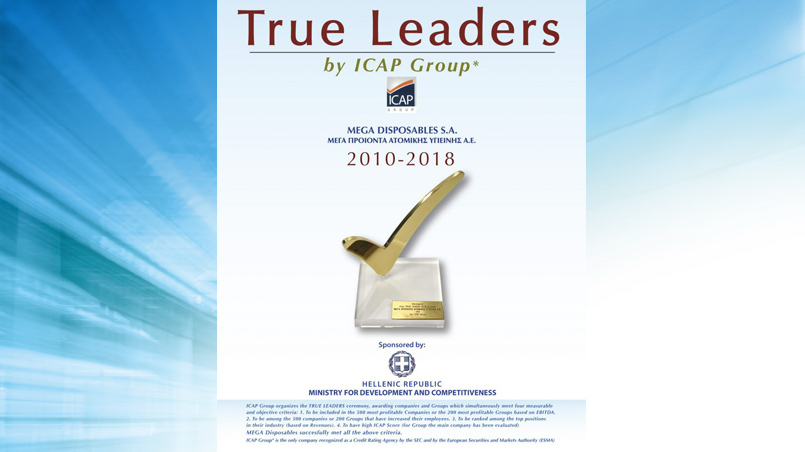 Two gold awards for MEGA at the Greek Export Awards

In a year when Mega has set a new export record, doubling its exports since 2010, gold awards have come to reward Excellence in its exports.
1. Gold Award for Top Industrial Export Company. MEGA has invested for decades in extroversion, with its products now on 4 continents, thus enhancing Greek presence and innovation in the demanding international market.
2. Gold Award for Top Branded Export Product Babylino Sensitive. The Greek Babylino Sensitive baby diapers travel daily on the shelves abroad, being a worthy representative of Greek personal hygiene products in the international arena.  Babylino’s high product safety and excellent quality have even been recognized by the European Commission, as Babylino was recently honored with the European Leading European Product Safety Award. 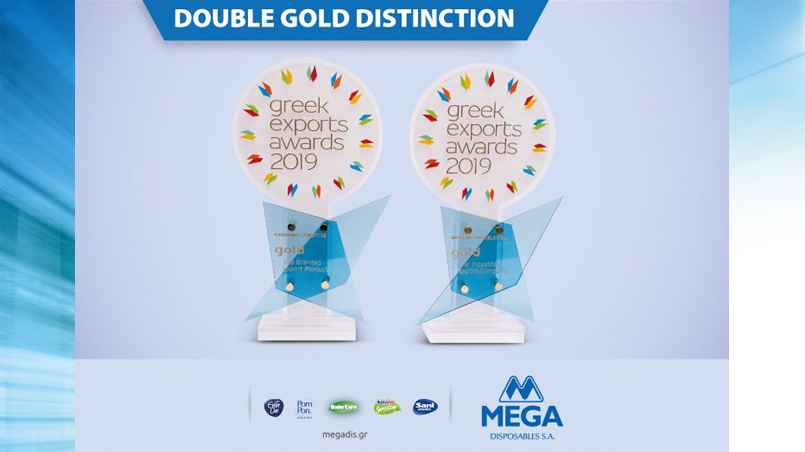 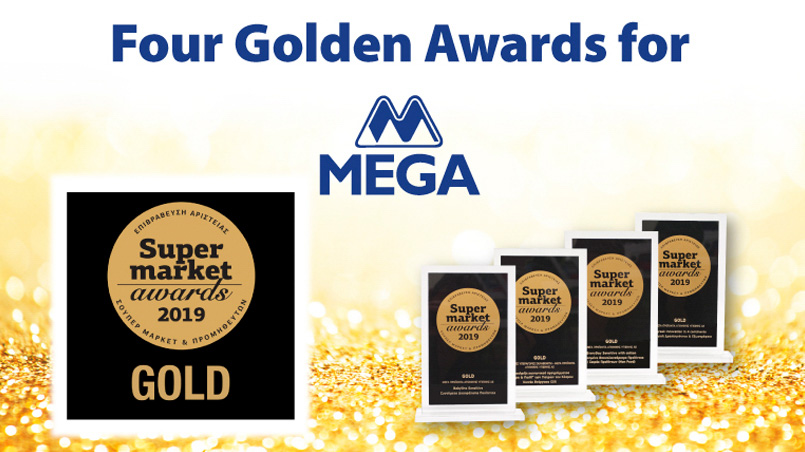 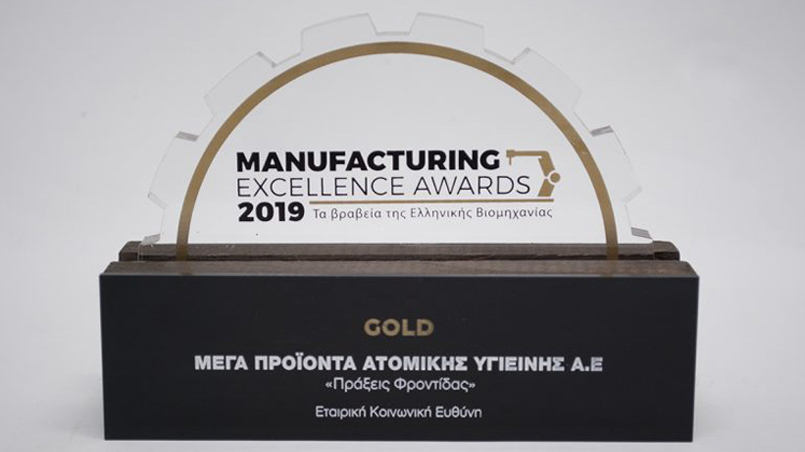 MEGA protagonist of the Greek Economy 2019 for Personal Hygiene Sector

MEGA won another major distinction in this year’s “Protagonists of the Greek Economy 2019” Awards, confirming for another year its strong financial growth and its contribution to the Greek economy. 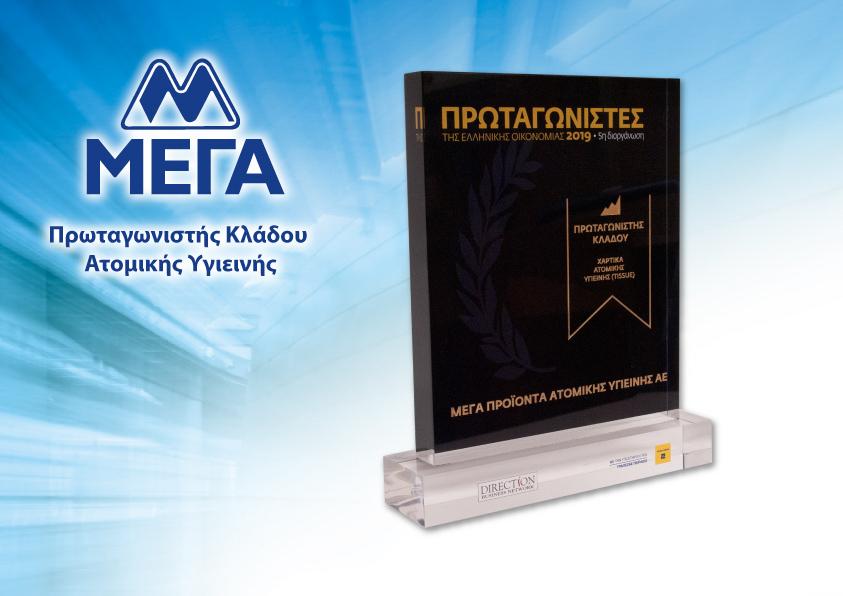 MEGA Disposables received the important 2019 Kouros Prize for its important export activity, in the presence of the President of the Republic, Prokopis Pavlopoulos. 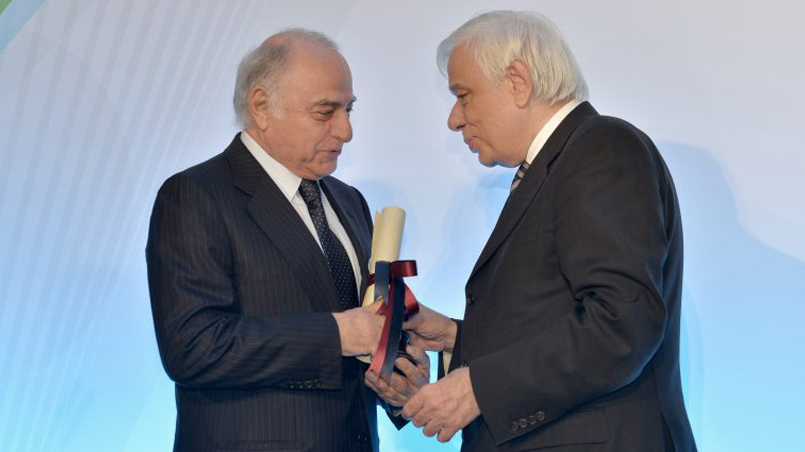 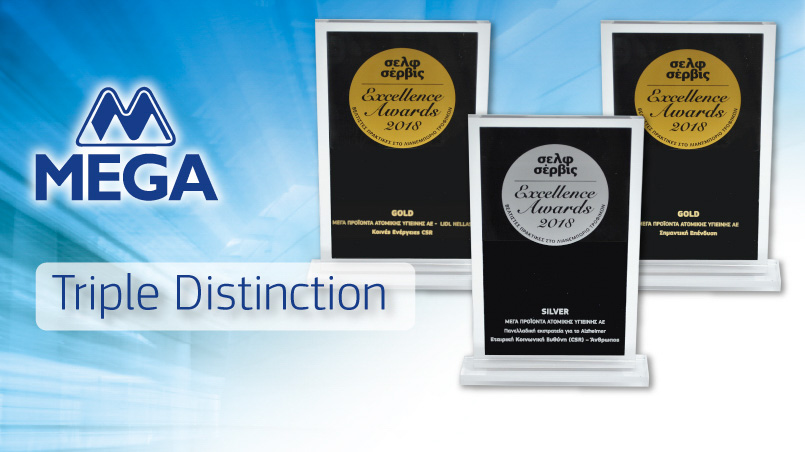 Gold Award for MEGA at the Environmental Awards 2018

MEGA received the golden award in Resource Sustainability category for its Waste Management program at its state-of-the-art factory facilities. 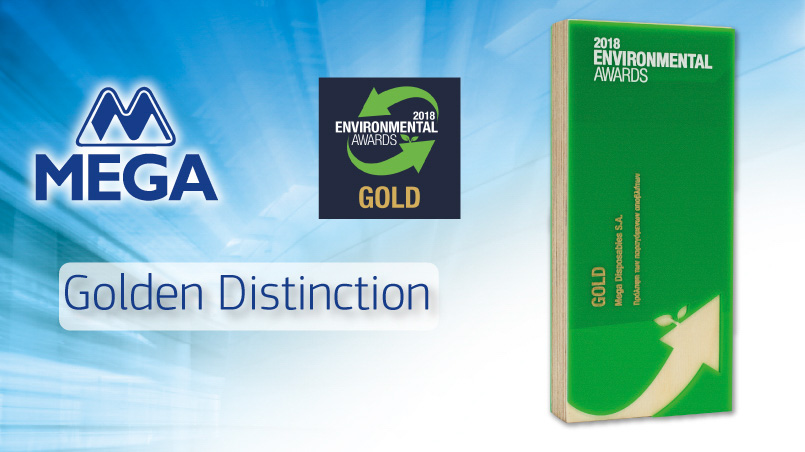 The company received the “Business Exports” award that rewards leading businesses that play a major role in paving the way and in actively supporting the Greek economy. Moreover, MEGA received the “Protagonist of the Greek Industry” award (Personal Hygiene – Tissue). The award arises from official data of published balance sheets as well as the general impression and the market’s assessment about the company’s progress in Greece. 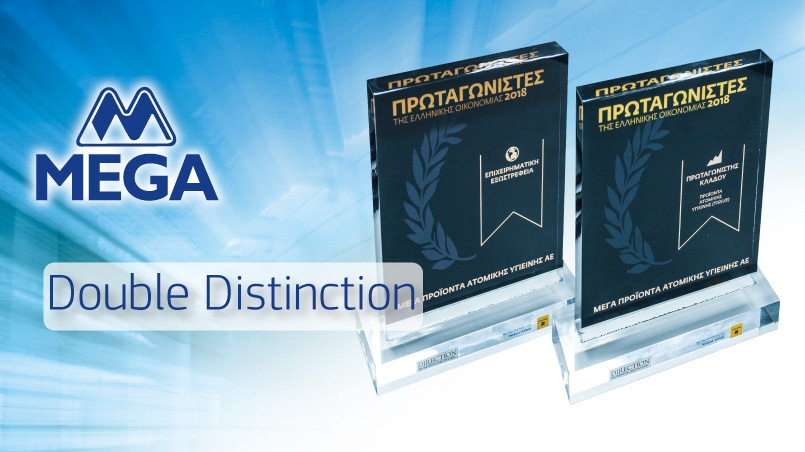 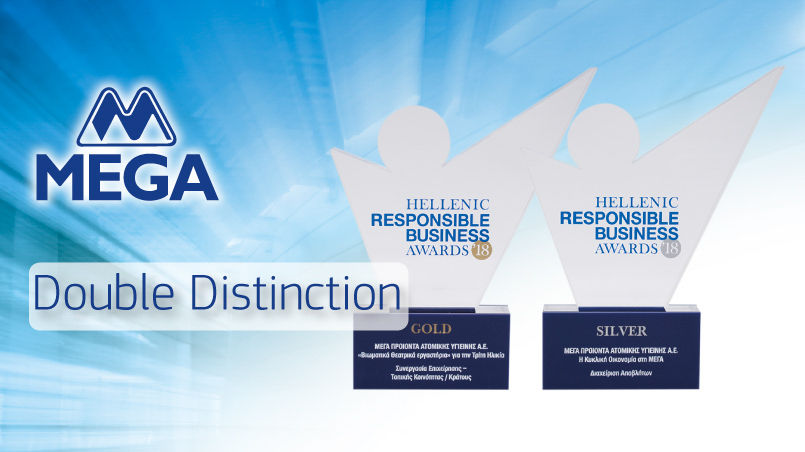 This award constitutes recognition of the important work of MEGA S.A. for the protection of environment, which is at the heart of company’s strategy for sustainable development. 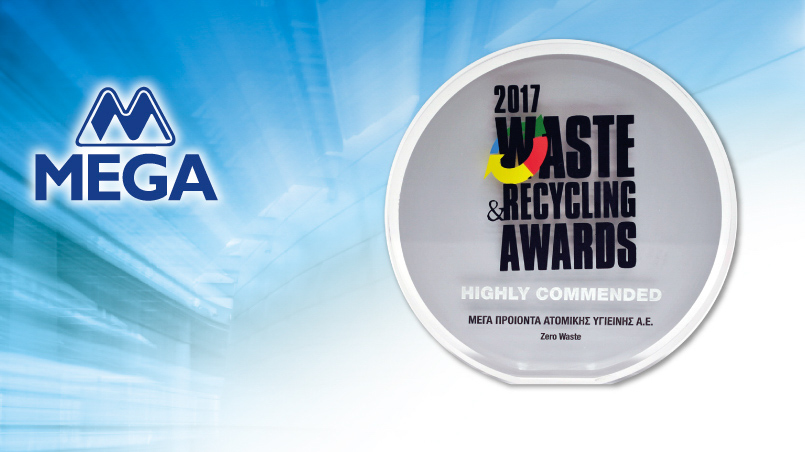 One more distinction won Babylino in « Self Service Excellence Awards 2017»

Babylino has won the Award in the category “Product Sales / Market Share increase – Non Food” at the Self Service Excellence Awards 2017, in an impressive ceremony for Retail, held at Hotel Grande Bretagne, in Athens, on July 6th. 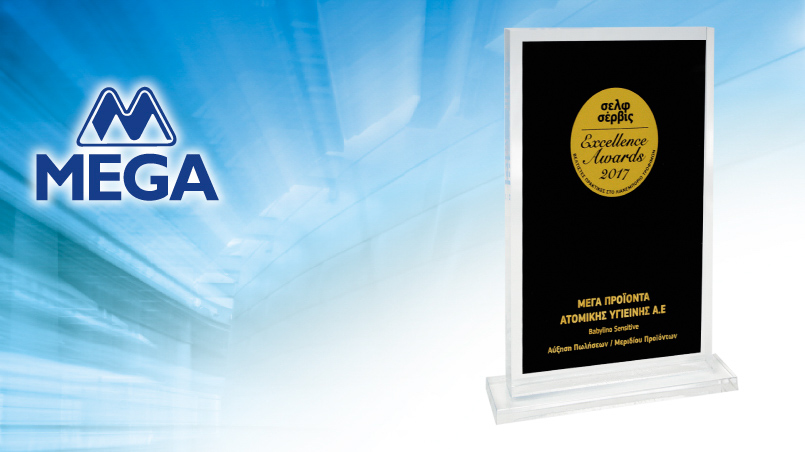 A distinction of at most importance : «Growth Award» for Mega Disposables

MEGA S.A. was elected as the winner in the category “Functional / Operational improvement”, within the framework of  Growth Awards held by Eurobank and Grand Thornton, which reflects the continuous effort of MEGA S.A for Excellence, in designing and producing top quality innovative personal hygiene products, and also in its Operational model, as well as its overall activities. 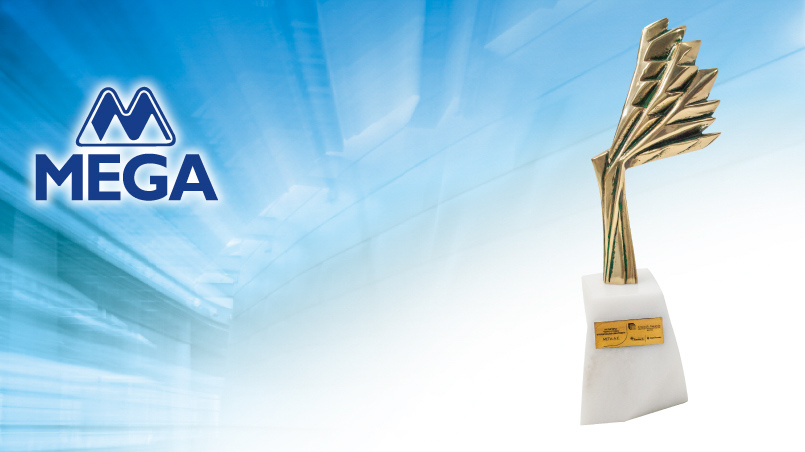 A triple distinction for MEGA S.A in the «Greek Exports Awards»

MEGA Disposables S.A, one of the largest and most sophisticated industries of personal hygiene products in Europe, was awarded three important awards in the Greek Exports Awards ceremony. The Greek Exports Awards 2016 was organized for the 5th consecutive year, by the Association of Employees of Diplomatic Economic & Commercial Affairs of the Ministry of Foreign Affairs, in collaboration with Ethos Media S.A., honoring companies for outstanding achievements in exports, while enhancing productivity, competitiveness and employment in Greece. 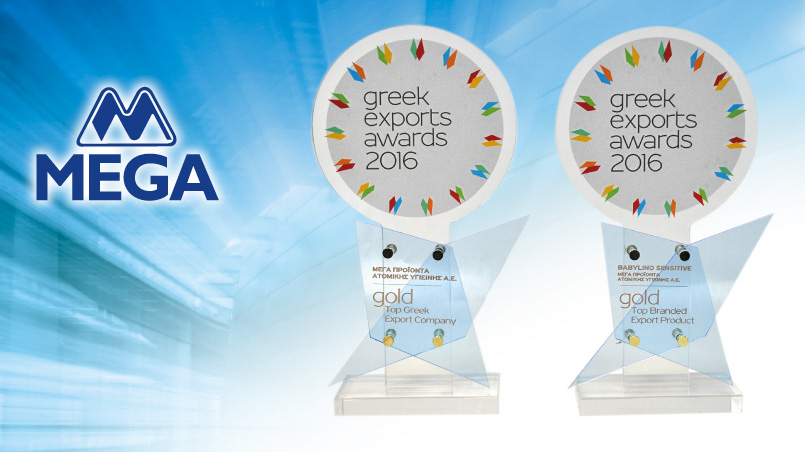 Mega Disposables received for the second time, the Honorary distinction for its contribution on the important actions, during the previous year, of the Union “Together for Children”. Our company is very concerned with issues related to children and continues to support with unique sensitivity the important social actions all over Greece. 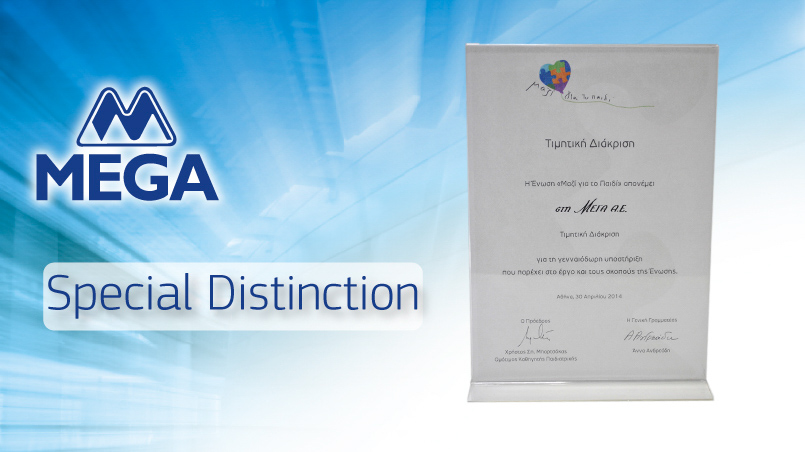 MEGA SA was awarded for the 6th consecutive year as ” Diamond of the Greek Economy» by Stat Bank, confirming its strong growth. 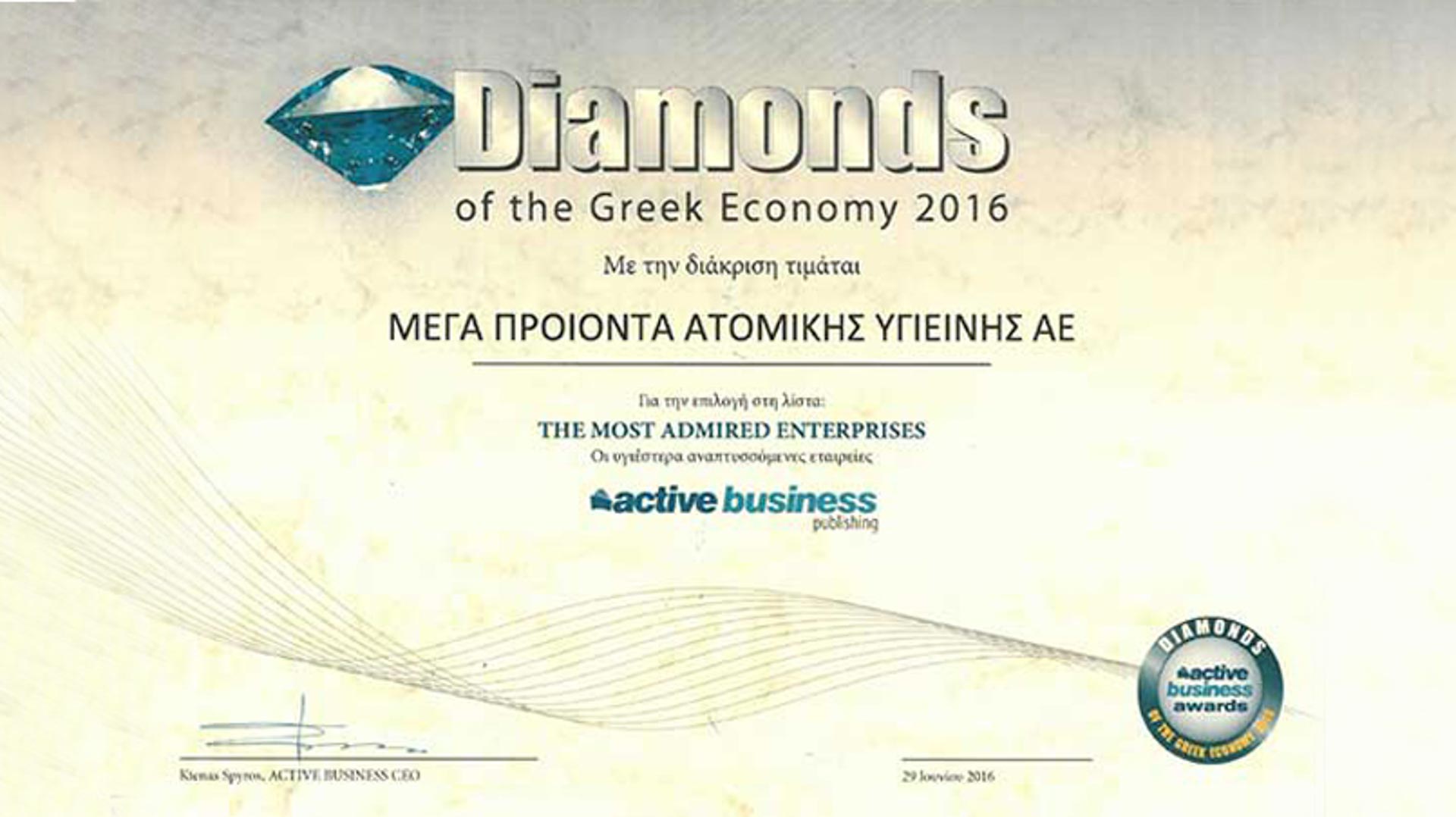 The distinction in the category “Sales / Market  Share Increase – Non Food” confirms the highly successful performance of EveryDay brand,from its beginnings to today. The prize was awarded due to the large market share rise that stood across the «non food» category. 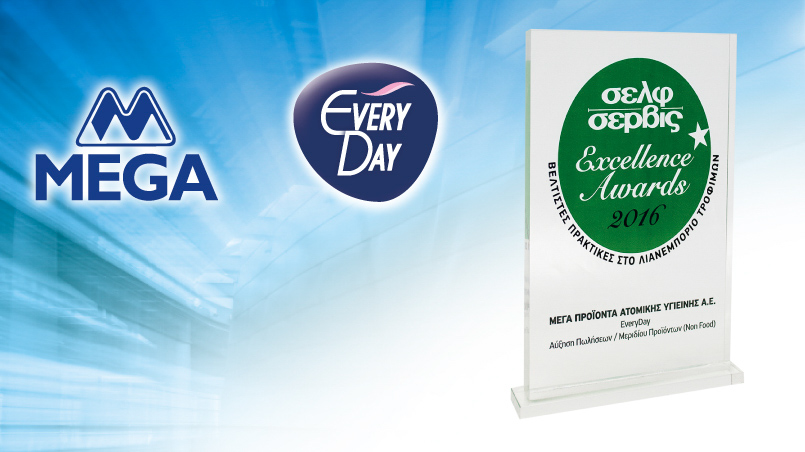 The first award in the category of  “Branded Greek Product” received the Greek baby diapers Babylino Sensitive, of Mega Disposables, at “Made in Greece 2015” Awards. This top distinction, based on strict evaluation criteria, proves that the 100%  Greek baby products  Babylino Sensitive, despite the financial crisis,  represent the Greek innovation and development. 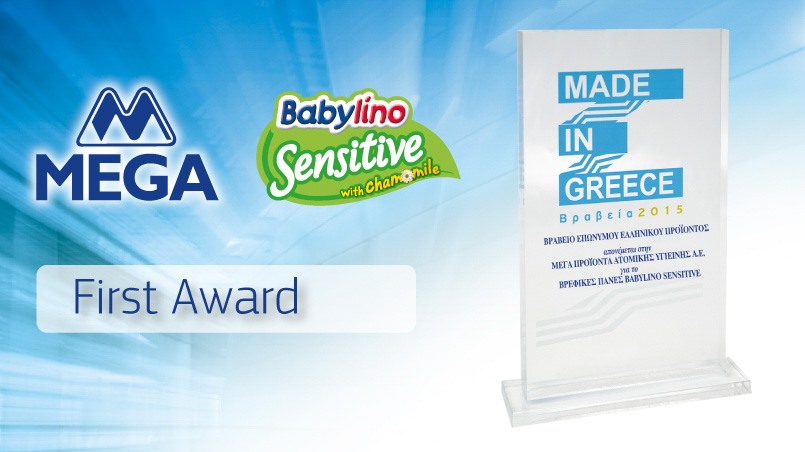 The distinction proves that the 100% Greek baby product Babylino Sensitive, despite the extremely difficult period of of financial crisis, managed to make the difference by increasing its market share in a very short period and gaining strong presence in important markets abroad. 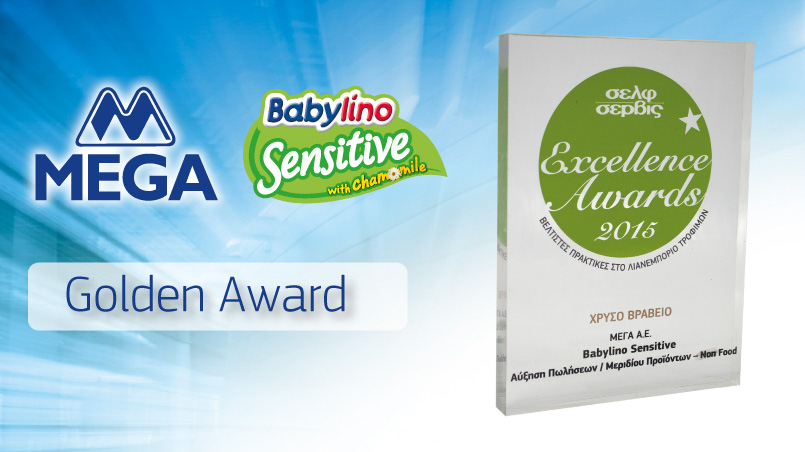 The distinction in the category “Corporate Social Responsibility”, shedding light to the Third Age.

The initiative aimed to shine the spotlight on and honour the elderly around Greece on the International Day of Older Persons (01/10), providing them with an opportunity to share their knowledge and precious wisdom with the younger generations. In addition, it aimed to provide material help to the elderly poor who were suffering the effects of the economic crisis. At the same time, it promoted the awareness of young people of the “preciousness” and value of older people today in Greece and strengthened the dialogue between the two generations. 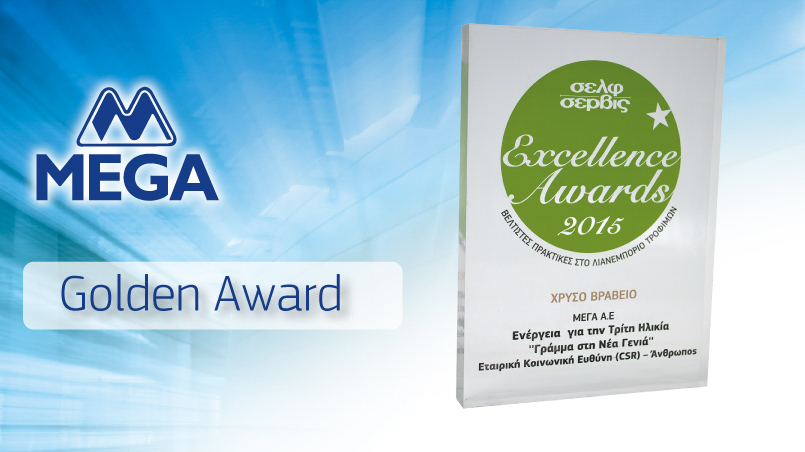 MEGA SA was awarded for the 5th consecutive year as “Diamond of the Greek Economy” by Stat Bank, confirming its strong growth. The particular award seals not only Mega Disposables constant rising route, but also its actual support to Greek economy. 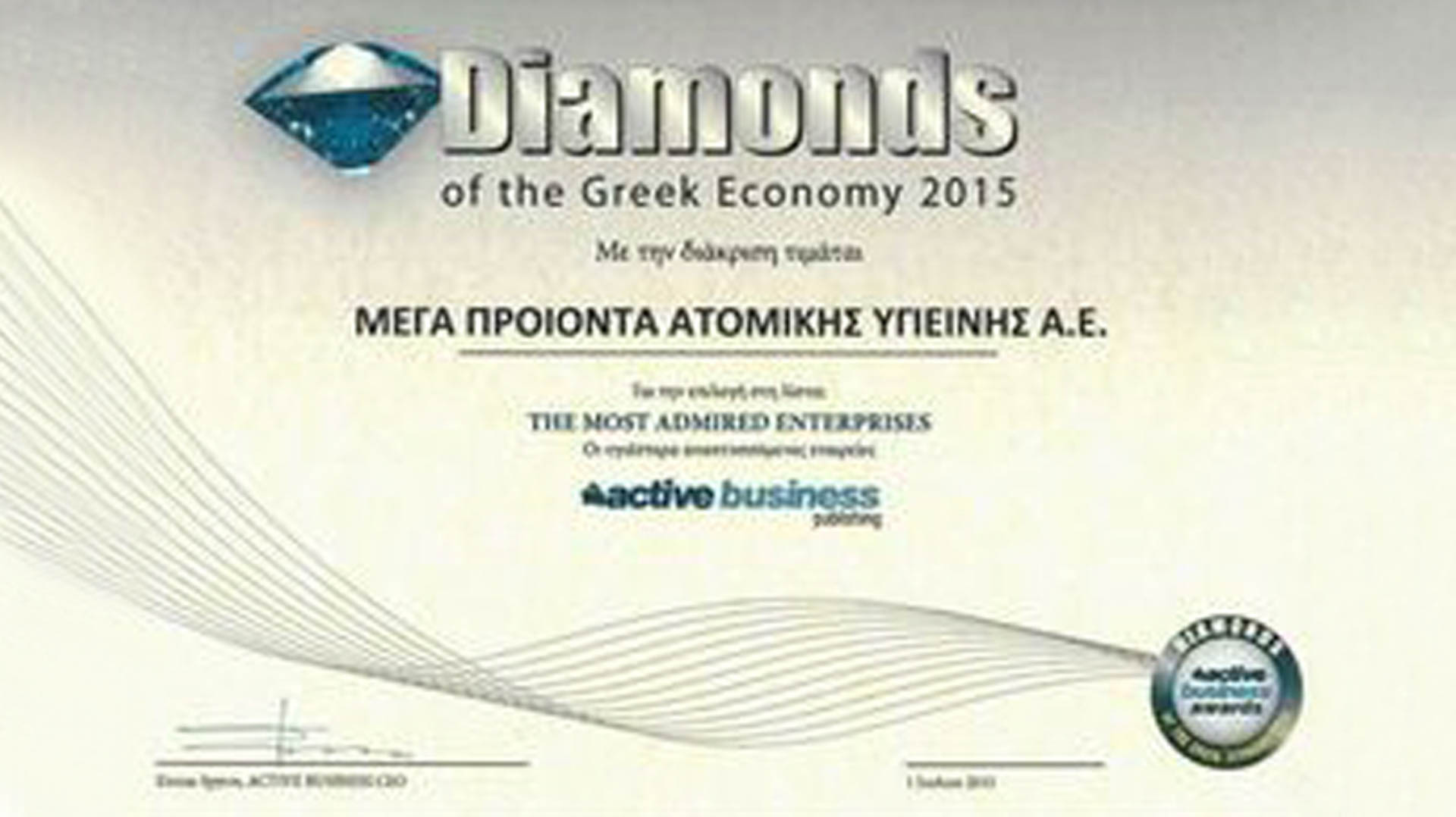 MEGA Disposables received the Environmental Awareness Ecopolis Award 2015 and was distinguished for “beyond the duty excellent work in the category of Environmental Policy – particularly for the Solid Waste Management Program “.

The award is recognition which rewards the important and significant work for environmental protection, which is the “heart” of company’s strategy for sustainable development. 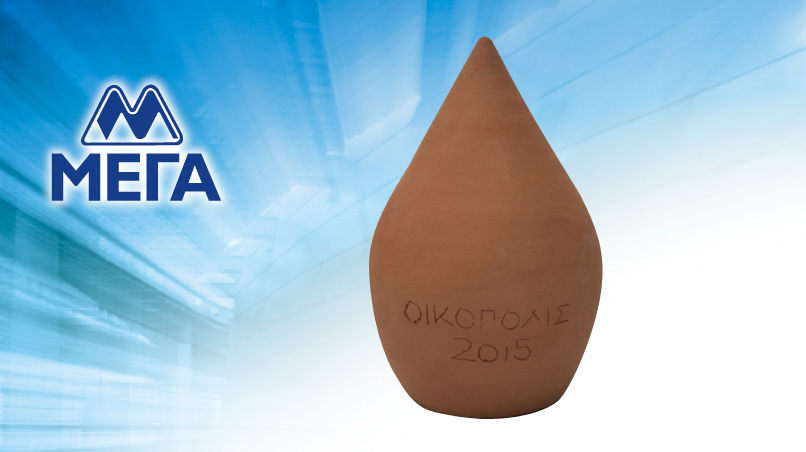 This distinction is a great honor for MEGA, as it has been awarded by its clients themselves (i.e. the retailers in Greece), confirming the company’s excellent performance, customer-oriented philosophy, ethical standards and excellent working relationships with the Greek Retail. 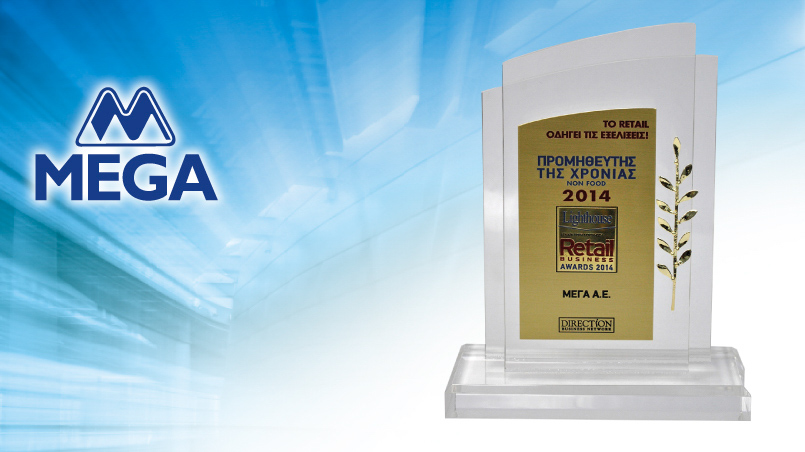 The significant «Life Achievement Award» was awarded to Mr.Vitouladitis in recognition of his development of the industry, his contribution to the Greek product innovation, the sustainable entrepreneurship, but also for his ethical standards and excellent relationships with the retail market. 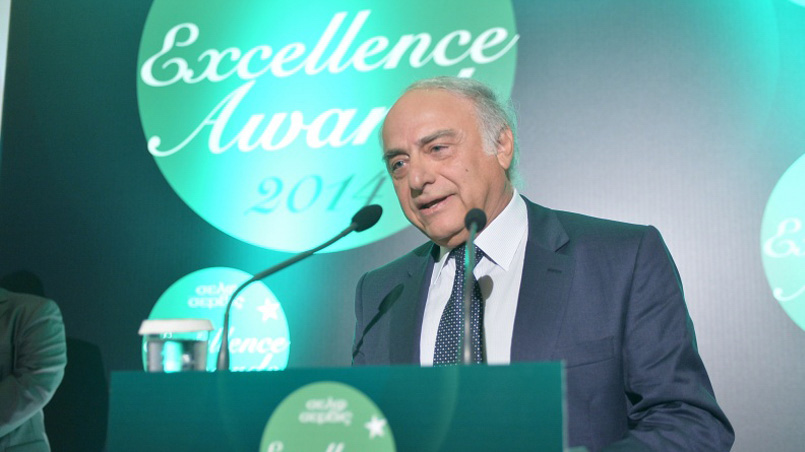 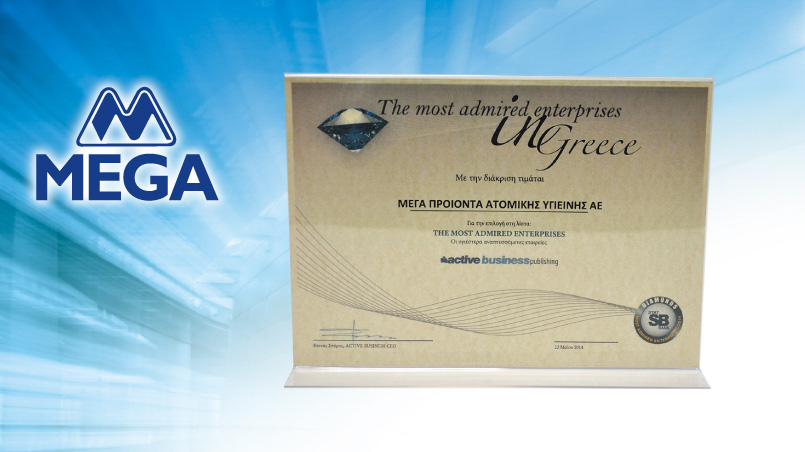 In 2013, MEGA S.A. was named among the ten best companies in Europe, in the Exports sector, receiving the honorary distinction of «Ruban d’ Honneur Imports/Exports» at European Business Awards 2012/2013, a pan European institution which has as its main objective the identification and reward of the most dynamic companies of the European business community. 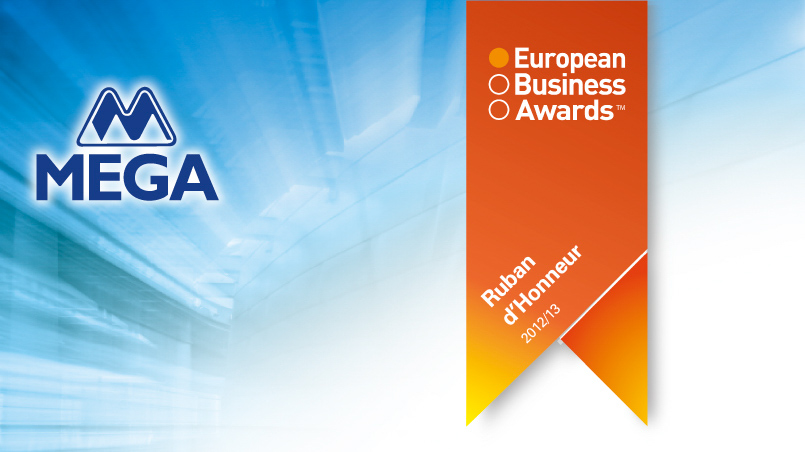 Honorary distinction for Mega Disposables in the Awards of the Non-profit Union ‘Together for Children’ 2014.

MEGA S.A. received the Honorary Distinction for its contribution in the support of the important work of the Union Together for Children. Sensitive to the needs of children, the company is a staunt advocate of children’s issues.

Another honorary prize, another special award for MEGA. According to a company spokesman, the award as a ‘True Leader’ is once again a special honor for MEGA, which is committed to continuing to support the Greek economy by investing in modern technology and human resources and producing innovative products. 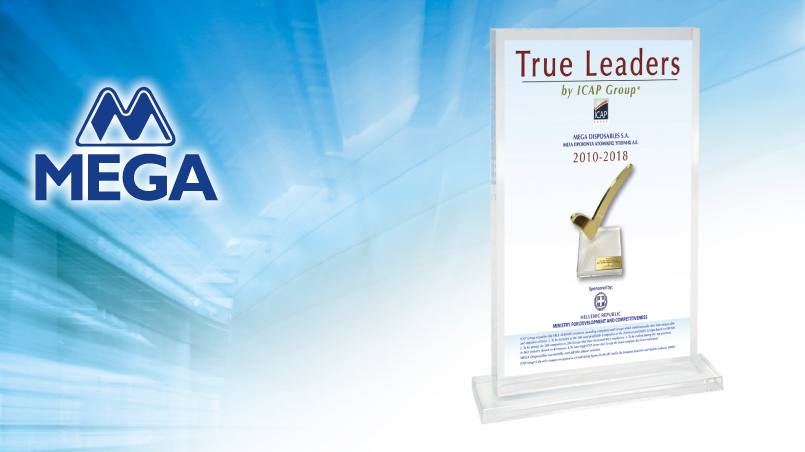 ‘True Leader’ of the Greek Economy for the 2nd consecutive year.

Mega is ‘True Leader’ of the Greek economy for the second consecutive year, meeting four objective and measurable criteria:

MEGA between ‘STRONGEST COMPANIES IN GREECE’ for 2011

In the midst of the Greek crisis, MEGA continued to be a member of the Community of ‘STRONGEST COMPANIES IN GREECE’ for the second consecutive year. ICAP Group is recognized by the Bank of Greece as an External Credit Rating Organization and by the European Central Bank as an Accredited Credit Rating Source. The Strongest Companies in Greece community has only one in ten businesses in Greece.