Αρχική Sustainable Development Our Strategy Why we care for the Environment

Why we care for the Environment

Our Planet and Climate Change

More specifically, the activities accompanied by the use and combustion of fossil fuels, deforestation, and livestock have been releasing greenhouse gases, and as a result have intensified the greenhouse effect, which inevitably led to global warming.

Greenhouse gases exist in nature, however human activity results in the increase of concentrations of some of them in the atmosphere, such as the following:

“The period 2011-2020 was the warmest decade ever recorded, as global average temperatures exceeded pre-industrial levels by 1.1 ° C in 2019. Anthropogenic global warming is currently increasing at a rate of 0.2 °C per decade.

An increase in temperature of 2 °C compared to the pre-industrial era is associated with serious adverse effects on the natural environment and human health and well-being, as well as a much higher risk of dangerous and potentially catastrophic changes in the global environment.

For this reason, the international community has recognized the need to keep the temperature rise well below 2 °C and to continue efforts to reduce it to 1.5 ° C”. (Source: EU Official site for the Climate Change: https://ec.europa.eu/clima/change/causes_en

The effects of climate change and global warming have been evident for decades, but nowadays the problem is intensifying rapidly, affecting many sectors, by creating risks such as:

Our Planet is sending out an S.O.S. 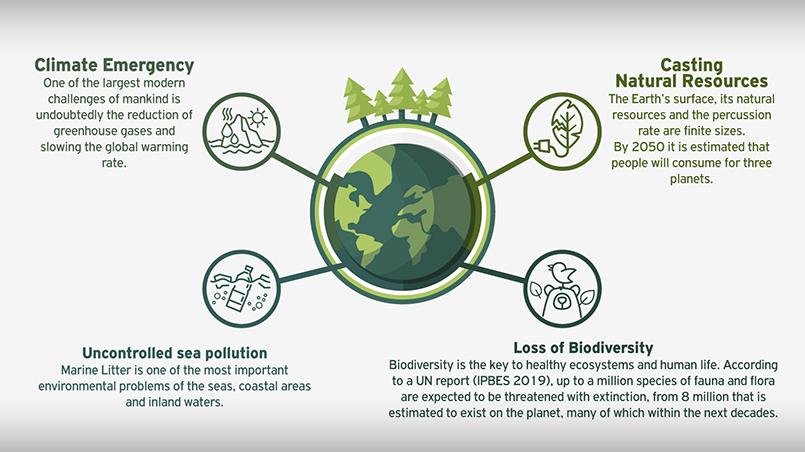